Who Built this Bird of Time? 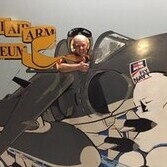