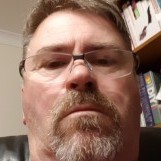 Hi from a not so sunny Devon